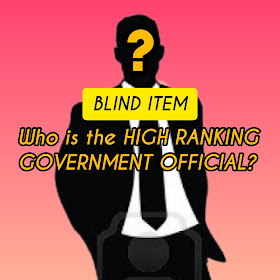 Who is this high ranking official of the government along with two special employees of the said official stands as a collector and depositor?

Accorinding to our source, the collector and  someone who he is currently negotiating is collecting a lot of money for his so-called "boss" who is this government official.

The collector makes sure that the money collected is given at the right time and there is another official that serves as the depositor of the collected  amount into the bank account or the high ranking official.

The negotiation is made through a series of text messages during the month of June and July this year in which they had a separate conversation with another guy that talks about the milions collected from a project that is supposed to benefit the poor citizens.

Here is a sample of the text of the Collector " Request for P100M para inclusive ang mga cabinets, tables and chairs” at “Sa Friday may check release na si (taga-SUBI) .. pls make sure nalagyan ng P100M ni Boss yung account nya Ty” ("Request for P100M inclusive of cabinets, tables, and chairs." & "On Friday w have a check release from [from SUBI]... please make sure to put P100M on Boss' bank account.") are the contained text back in June 7, which is just a few weeks before President Duterte steps down from his position.

It seems like the High Ranking Government Official is a tycoon beacuse his Collector and Depositor are not just simple officials, because the tandem is a lawmaker, and a businessman.

The Collector of the High Ranking Government Official, is what you could say has a tainted reputation because of the many scandals he had with the government and that is why he tries to be close of the current administration to get off the hook.

Accordiing to our source, the ammount the Collector recieves amounts to P100 Million just for the High Ranking Government Official alone. It seems that the trend in the administration of President Bongbong Marcos is always worth P100 Million.

The Depositor of the collected amount by the Collector has been involved with a feud between political families from a city in the National Capital Region (NCR).

The Collector is a lady lawmaker from a province and the Depositor is known for her rackets like her initials.

But the highlight of this blind item is the High Ranking Government Official who the Collectoe works for.

CLUE: It has been reported that the High Ranking Government Official is under fire for having multiple bank accounts not only in the Philippines but also overseas, now under watch by the Anti Money Laundering Council.

The High Ranking Government Official  that has two underlings, the Collector & the Depositor, are refered to as "Mr. Sildonyo" (Mr. Sliphere, because he is slips here, and slips there.) from the money he acquired  with his modus operandi.