I do dread long physical activities not because its difficult or I would get tired, but its the feeling of getting body odor after sweating a lot. Its not only me who has this dilemma but also other men who interact with many people everyday. That is why grooming is now a growing priority with men nowadays. And this also calls for products that are just not smells manly but also protects longer. This is why I like Nivea Men. And they have this new variant called Silver Protect.

Now if we go back into chemistry and the the elements, Silver has this property to prevent bacteria from forming bonds up to create body odor. Its also the element that purifies water better than chlorine. And also this property has been known since ancient times and  now integrated into Nivea's deo roll on and body spray.

And to put this product to the test, Me and my Blogger friends took the challenge of going into the fun yet challenging game of Laser tagging at Lazer Xtreme in Market! Market! And this game is not only strategy but also a lot of movement to avoid getting hit and also make a score too. In the fifteen minute war between three teams (red, blue and green, which I belong to to), did really made us work up our sweat glands all over our bodies. It was indeed tiring yet very fun, and we were thinking of doing this again some other time. And when I check on my underarms, it still smell fresh like the last time I sprayed Silver Protect on it.

I also use other products from Nivea which actually works for me which frees me to settle with  women's products just to be sleek and clean. Last time we went on the Circuit 360 challenge which paved the way for better grooming habits.

You might also want to try you skills and charm in the Nivea Men Silver Protect Challenge wherein you can win awesome prizes from Nivea.

Will Smith, Martin Lawrence Back for One Last Ride in "Bad Boys for Life" 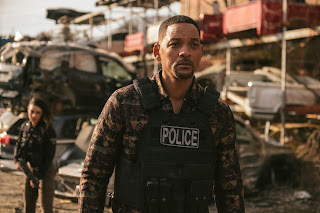